With this add on, the washing machine is enhanced with the following features:

1. The washing process will be started at a preselected point of time
This makes it possible for my wife to time the washing according to the other taskes (like shopping and walking etc.). The washing starts while she is out and finishes just in time she reaches home. So the clothes won’t lay to long in the machine. As the washing machine is accessible over the internet via VPN with the add on, the starting time can be changed easily through her smartphone, if something unexpected occurs.

2. The washing machine notifies you through different channels of the current state of the process
As our family don’t want to go downstairs to the laundry room, the machine should notify us of the current state of the washing process. Especially when the process is finished, it should remind us in an appropriate way. This could be either via a web-interface or though sending an e-mail.

3. Business intelligence
As we’re a young family we have to be money-saving, so we want the machine to log the washing time in a database and visualize the information over a webinterface.

Bring this project to life

As I want to teach my daughter how to tinker with a raspberry pi, we use it as a plattform for this project.

What other things do we need:
1. Silicon PIN photodiode bpw34: With this photodiode we keep track of the fast changing LED at the washing machine, which indicates the current state. We’ll write an algorithm to interpret the flushing LED at the washing machine with the method of samling.
2. WLAN-Dongle: In order to get access to the local router, the raspberry pi, which is operated as a headless pi, can be programmed and notify his current status.
3. At least some jumper-wires and resistors are needed for the prototyping.

The raspberry pi will be used as:

a) server: This provides the user an mobile interface using jquery-mobile, php and a mysql-database. Through this interface the starting time of the washing machine can be set through a calender/time widget. Further more the actual state and the calculated remaining minutes and end time of the washing process will be presented to the user.

b) sensor: The raspberry pi reads the value of the Silicon PIN photodiode bpw34 via the GPIOs. Therefore python an the famous Rpi.GPIO-library are used. After interpreting the value the process data are logged into the mysql-database for BI-purpose.

Prototype of the needed circuit 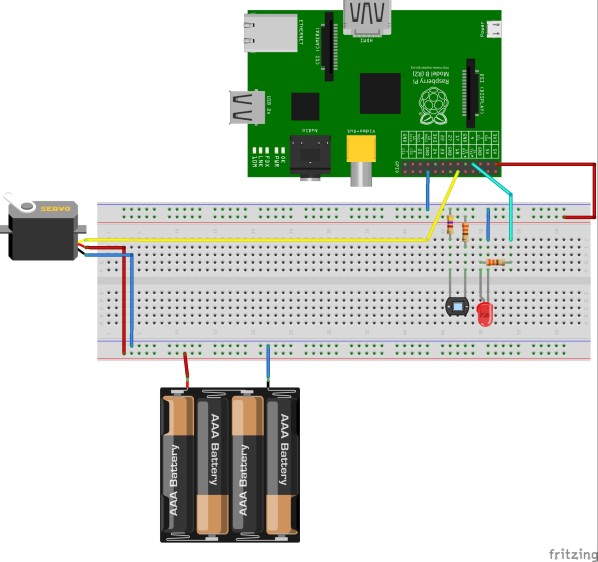 We would be glad to be choosen in your „Forget Me Not Challenge“, because this is a very interesting idea to enhance old things and use them in the internet of things.

The humankind is throwing away so much waste in order to have the latest stuff. This idea helps saving the nature and reduces the piles of waste in the less developed countries.

Additionally my daughter will get very usesful knowledge, which helps her to understand the following topics: